The superstar, the megastar Chiranjeevi is all ready with his much-awaited period drama film, Sye Raa as it released worldwide today. The film had been generating great buzz among the audience ever since the trailer came out. The much awaited film boasts of an incredible vast which has names like Chiranjeevi, Nayanthara, Sudeep, Vijay Sethupathi, Tamannaah, Jagapati Babu and Niharika Konidela in lead roles whereas Amitabh Bachchan is also playing a cameo in this period-drama. Being one of the highly awaited films of the year all thanks to the amazing cast, the hype around this film is sky-high. 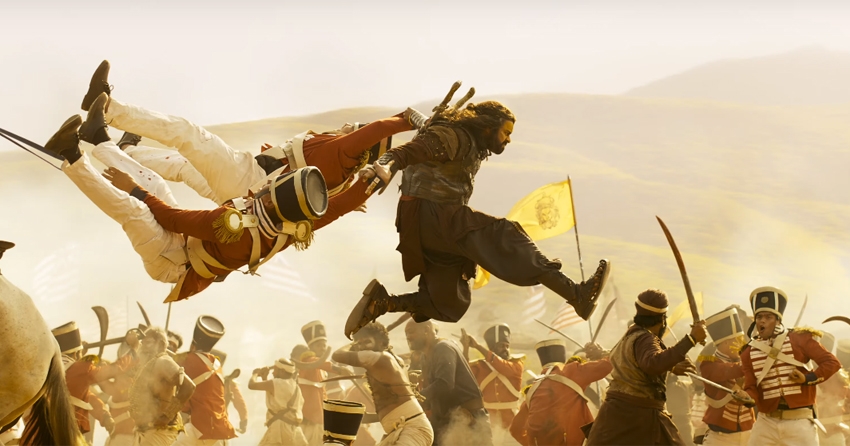 Directed by Surender Reddy, the film takes you back 100 years prior to India’s Independence in 1947 where the Britishers were ruling the country causing misery all over. The film primarily talks about the movement started by  Uyyalavada Narsimha Reddy, played by Chiranjeevi, one of the many kings who ruled in the southern parts of India. His bravery and goodwill knew no boundaries and he had the power of instilling a wave of unabashed love for one’s country in people inspiring them to fight for their motherland like no one else.

Power-packed by never before VFX and high-octane action scenes, Sye Raa is one of a kind film which had all it required to make a fabulous action period-drama right from a maverick star-cast to world-class VFX effects and more than brilliantly choreographed action-sequences. It is just the dragging story-telling which lacked which could have been the perfect ingredient for it to be an almost perfect film. Nevertheless, all the actors did their job to the T.

If you are a fan of south-Indian films which have a lot many twists & turns plus if you are a Chiranjeevi fan, you just can’t miss this film! To add to the performances, it was a start to end Chiranjeevi show where he lived the character of the warrior king brilliantly and it seemed like he knew the character. Also, let’s not forget the brilliant role played by Amitabh Bachchan who plays the guru to Sye Raa and keeps guiding him whenever he is in doubt. We feel he should have been given a longer role but still, he aces it. Special mention to Tamannaah’s last scene where she is asked to dance before the Britishers and kills more than 5000 of them in the process using her wit is outstanding and leaves an everlasting impact!

The movie will definitely make you remember all those who sacrificed their lives fighting for the nation’s Independence right from Sye Raa to Rani Lakshmi Bai and will make you love your country even more!

See Pics: Justin Bieber And Hailey Baldwin’s Show Off Their WEDDING Rings With Style And, We’re Loving It!

This Year That Day Box Offic ...

Pallavi Mukherjee
Entrepreneur, media junkie and most importantly a creative enthusiast who is always hungry for more. Writing, editing and expressing in words is an art that comes naturally. Started this website with less expectations, overwhelmed by so much love and adulation. Keep it coming. Popdiaries has my heart, quite literally.

“A small bit can go a long way”, says Jacqueline Fernandez as she spreads awareness and urges people to do their bit!

An initiative that recieved a hulking support from the Bollywood and Television fraternity, saving millions of lives!

© 2020 Popdiaries all rights reserved | Site maintained by UD IT SOLUTIONS